- July 08, 2020
June 17, 2020
After about 100 hours of hard work from late April through mid-June, Kole Sere was launched by the good people at Liberty Marina on the Danvers River in Danvers, MA.
The marina was quite busy so we agreed to get her out as soon as possible.  We arranged for a transient mooring at Safe Harbor Hawthorne Cove Marina in Salem Harbor before sailing her home to her mooring in Harpswell.
Upon arriving at the Marina, I assumed the boat would be somewhere near the launch out...it was not.  After 5 minutes of searching, including verifying she was not on the hard, I found her tucked nicely at the dock waiting for me.

Before leaving, I had a lot of stuff to load on the boat.  I also wanted to get the sails on and make sure all systems were running.  The Yanmar diesel started up right away.  I flushed the water tank one more time and started to get ready for departure.   My boat broker, Marc Winder, from Sailboats Northeast stopped by.  He was going to give me a ride back to Danvers after I dropped the boat in Salem.
Feeling I was ready to go, I pulled the lines in and started off down the Danvers River.  Within 599 feet from the dock, an engine warning alarm went off.  It was an over heating alarm.  I quickly turned around and go the boat back to the dock.  Two gentlemen helped me with my less than gracious docking attempt.
After tying up, I immediately shut down the motor.  When I went down below, you could feel the engine heat.   I had an inkling of what might be wrong.  I opened up the hatches under the rear berth and I immediately found our problem.... I forgot to open at the the water intake valve.  Ugggghhhh.   After opening the valve, I let the engine cool down a little.  When I restarted the motor, the alarm came on and quickly went off.  Crisis averted.
I cast off again and started down the Danvers.  Of course I can hear in the radio that I just missed a bridge opening.  I motor down to the Kernwood Ave Bridge and wait about 10 minutes for the opening of the swing bridge.

After successfully navigating the first bridge, the Mass Bay railroad bridge is next about 1/2 mile down river.   As I approach the open bridge, the bridge-tender hails me on the radio to keep on coming.  As soon as I get through, he closes the bridge for the train.
Next I arrive at the mouth of the river in Beverly.  I follow the channel past Beverly and hang a right into Salem Harbor, passing this lighthouse and small boat on its mooring off of Marblehead.

As instructed, I radio the marina on the approach.  After 10 minutes they finally respond.  I am met by a Boston whaler and two college kids who escort me to my mooring.  They point out the mooring ball and high tail it out of there.
I button up the boat, as it will be riding the mooring by itself for two days.  The launch driver picks me up and brings me to the dock where I meet Marc for my 15 minute ride back to Danvers.
Talking to Marc about my word, he recommends changing the impeller on the motor after the overheating.  If you are ever buying a boat, I highly recommend Marc Winder from Sailboats Northeast.  I can provide contact info if you need it.
So we are all set for our upcoming voyage to Maine.  All in all, Kole Sere day one was a success.

Popular posts from this blog 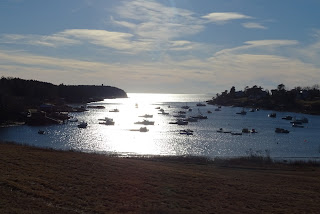 SV_KOLE_SERE
This is the blog of Dave and Sara along with their four legged buddy Bash. Our boat is a 1990 Hunter 30-2 that we acquired in a December 2019. We are currently sailing out of Harpswell, Maine. We mostly day-sail Casio Bay and the nearby Atlantic Ocean along with some weekend excursions. Our 5 year plan is for a 40+ foot boat and a life in the palm trees. Check us out on Instagram @sv_kole_sere